In Conversation with Deborah Hay 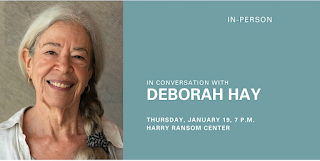 In celebration of Hay’s archive recently coming to the Ransom Center, join Hay and her archival collaborator, Laurent Pichaud, for a conversation about what it means to document dance.

“What my body can do is limited. This is not a bad thing because how I choreograph frees me from those limitations. Writing is then how I reframe and understand the body through my choreography.” — Deborah Hay

Seating is limited, please RSVP. Please note that a reservation does not guarantee a seat. Seats not claimed by 6:50 p.m. may be released.

For free tickets to the event at the Ransom Center on January 19: https://www.eventbrite.com/e/in-conversation-with-deborah-hay-tickets-487568810437 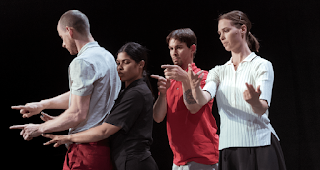 A performance of Hay’s 2004 masterpiece The Match will kick off a day of performance, discussion, and film screenings. This iconic work contains meditation-like exercises that invisibly bind the dancers to the material by establishing a mental, emotional, and bodily rigor visible in the performance. Time Out, New York proclaimed “The Match is a fascinating, vibrant battle of wits that unfolds through a silent score of movement.”

Horse, the solos, is a meditation on the climate crisis and modern survival, with new music by Austin-based composer Graham Reynolds. “Horse, the solos is choreographed in a manner that relies on an intuitive understanding of risk, efficiency, and survival. There is control in efficiency but not risk-taking. Combined they establish the conditions for [the work],” says Hay.  For its U.S. premiere, Graham Reynolds will perform the music live for the first time.  The program will open with a rare solo performance by Deborah Hay.

2 p.m. Live performance of "The Match" by the Swedish company Cullberg