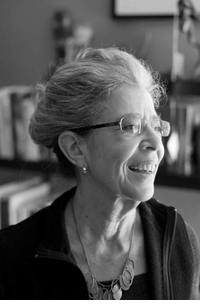 Deborah Hay was born in Brooklyn. Her mother, Shirley Goldensohn, was her first dance teacher, directing her training well into Hay’s teenage years. Three years of modern dance training with Bill Frank, a former member of the Nikolai Company, and years studying with Merce Cunningham and Mia Slavenska followed. In 1964, Hay danced with the Cunningham Dance Company during a six-month tour through Europe and Asia. Since 1961 she worked with other dancer/choreographers as part of Judson Dance Theater, focusing on large-scale dances involving untrained dancers.

In 1970 she left New York to live in a community in northern Vermont. She distanced herself from the performing arena, producing Ten Circle Dances, performed on 10 consecutive nights within a single community and no audience. The work was supported primarily by museums and art galleries, beginning a long period of reflection about how dance is transmitted and presented. Her first book, Moving through the Universe in Bare Feet (Swallow Press, 1975), describes these dances.

In 1976 Hay left Vermont and moved to Austin, Texas, where, in 1980, the Deborah Hay Dance Company was established. Including herself, its’ members were Emily Burken, Heloise Gold, and Diana Prechter. While developing her choreography she instituted a yearly 4-month group workshop that culminated in large group public performances in Austin and from these group works she distilled her solo dances. Her book, Lamb at the Altar: The Story of a Dance (Duke University Press, 1994), documents this unique process. Several National Endowment for the Arts Fellowships in Choreography and a 1981 Guggenheim Fellowship helped support her work during this period.

Hay then focused almost exclusively on solo work. The Man Who Grew Common in Wisdom, Voilà, The Other Side of O, Fire, Boom Boom Boom, Music, The Ridge, Room, and No Time to Fly were performed worldwide and also passed on to noted performers. My Body, The Buddhist (Wesleyan University Press), was published in 2000. It is an introspective series of reflections on the major life lessons that Hay learned from her body while dancing. In 2019 Wesleyan Univ. Press published Using the Sky. It follows the evolution of her language, distilled through her own practice of performance. The book also includes 5 dance scores.

Hay conducted 14 annual Solo Performance Commissioning Projects from 1998 through 2012, first on Whidbey Island in Washington state and then at the Findhorn Foundation Community, Moray, Scotland. A one-hour documentary about this groundbreaking experiment, titled Turn Your F*^king Head, was made in 2012. It was commissioned by Independent Dance, based in London, and published by Routledge Books.

In 2002 she applied what she had learned from 30 years of working with mostly untrained dancers to choreographing dances for experienced dancers and choreographers. In 2004 she received a NYC Bessie Award for her quartet The Match, commissioned by Danspace. In 2006 she choreographed “O, O” for 5 New York City choreographer/dancers and later for seven French dancers of comparable experience. The Match was presented at the Montpellier Dance Festival in 2005. The Festival d’Automne, in Paris, presented The Match in 2005, “O, O” in 2006, and If I Sing to You, in 2008. If I Sing to You was commissioned by the Forsythe Company and toured extensively in Europe and Australia. In 2009 the Toronto Dance Theatre premiered her work, Up Until Now, and in 2010 Lightening, a dance for six Finnish dancer/choreographers, premiered at the Helsinki Festival.

In October 2009 Hay received an honorary doctorate in dance from the Theater Academy in Helsinki, Finland; 2010 US Artist Friends Fellowship; 2011 artist’s grant from the Foundation for Contemporary Arts in New York. In April 2012, Hay became one of the 21 American performing artists to receive the inaugural and groundbreaking 2012 Doris Duke Artist Award.

Hay’s first museum installation, Perception Unfolds: Looking at Deborah Hay’s Dance, was curated by Annette DiMeo Carlozzi for the Blanton Museum in Austin, Texas 2014. The installation traveled to Yale Art Museum and to the Academie der Kunst in Berlin.

In 2015 she collaborated with Laurie Anderson in an evening-length work, Figure a Sea, for 21 dancers and commissioned by Cullberg in Stockholm, Sweden.  The same year France’s Minister of Culture and Communication awarded Hay the Chevalier de l’ordre des Arts et des Lettres.

Her work was presented at the 2018 MoMA exhibition, Judson Dance Theatre: The Work Is Never Done. A cast of 10 New York dance ‘stars’ performed ten, choreographed by Hay in 1968. The performance was accompanied by the band Gang Gang Dance. For the exhibition, Hay also performed A Lecture on the Performance of Beauty from 2003.

With 7 other presentations of her choreography, Tanz Im August 2019 premiered two new works, Animals on the Beach, with Jeanine Durning, Vera Nevanlinna, Tilman O’Donnell, Christopher Roman, and Ros Warby and her solo, my choreographed body . . . revisited.  A major addition to the August celebration was the German publisher Hatje Cantz’s publication RE-Persepective: Deborah Hay, a book scanning her work since 1968. It includes photos, dance scores, articles by dance scholars and her more recent texts.

A second retrospective of Hay’s work was presented at Mercat des les Flors in Barcelona, Spain in 2021.

In 2022 Stockholm’s Cullberg Company premiered Horse, the solos, with an original score by Austin-based composer/musician Graham Reynolds and lights and set by Amsterdam-based Finnish artist Minna Tikkainen. What was unique about the premiere was from the moment the 7 dancers stepped onstage in costume, with the programmed lights and sound, there was not a living soul in the audience - no photographers, filmmakers, no techies, no choreographer, future presenters nor directors.