The archive of Deborah Hay and the Deborah Hay Dance Company is held at the Harry Ransom Center, at The University of Texas at Austin. It consists of over 60 boxes of material spanning the full breadth of Hay's life and career, including films, music, letters, diaries, photographs, production files, dance scores, interviews, and manuscripts for her published books. Questions about the collection can be sent to performingarts@hrc.utexas.edu.
Phyllis Liedeker Finley was the DHDC photo documentarian from the early 1980’s through mid 1990’s. If you are interested in purchasing her photos please contact her directly at phyllisfinley10@gmail.com. Examples of her work are exhibited here. 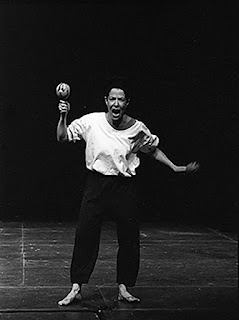 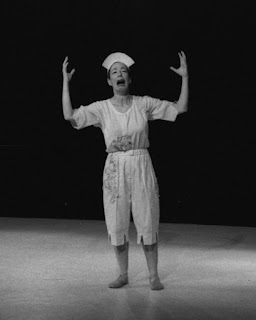 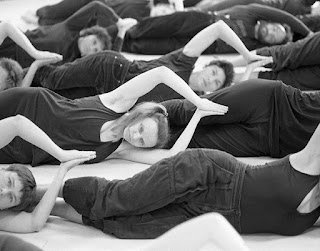 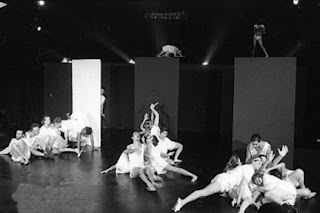 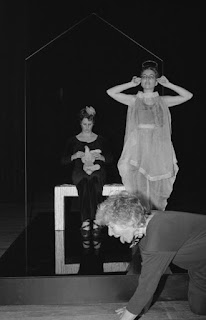 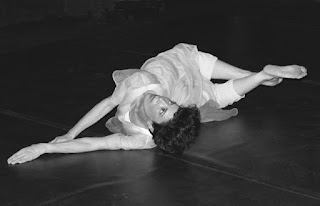 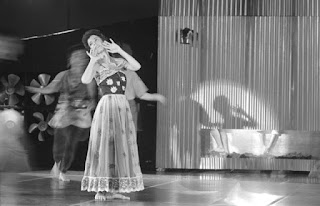 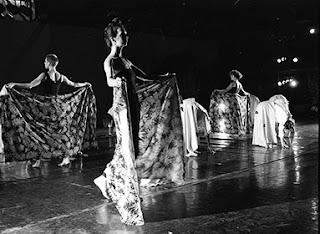 More About the Adaptation
Deborah Hay, 2011

The following thoughts are inspired by Igor Stravinsky’s “Poetics of Music in the form of six lessons” in particular Lesson #6, “The Performance of Music”. In some instances Stravinsky’s phrasing has merely been tweaked to accommodate my interest in further defining adaptation as a medium for the transmission of dance.

The performer who adapts one of my solo works calls into action 3 parallel roles: the dancer, choreographer, and the executant. Executant means “putting into effect the exact demands” which underlie the practice of performance of my movement material. Each dancer must be a conscious executant. At the same time the virtues of “fidelity and sympathy” with my choreographic preferences has to be felt. I run a risk every time my dances are performed because a competent practice of the work depends on the unforeseeable and imponderable factors that make up the performer’s virtues of fidelity, sympathy, and streaming perceptual challenges.

Every adaptation includes the execution of the specific, non-specific, yet easily discernible material within the written dance score that I provide. No matter how detailed or broad the language, between the written score and the performance are hidden elements that cannot be defined because my “verbal dialectic” is deliberately powerless to define the performer’s movement dialectic.

How do I recognize my choreography?
Deborah Hay, 2007

The Solo Performance Commissioning Project began in 1998 at the Whidbey Island Center for the Arts, in the town of Langley, WA. It took place for ten days annually for five summers before it was relocated to the Findhorn Foundation Community in Scotland in 2004 where it has since been administered by Gill Clarke and staff from Independent Dance in London and by Karl Jay-Lewin of Bodysurf Scotland, at Findhorn.

Of the eight SPCPs that have taken place, about 140 solo adaptations have been realized. I have been an audience member at only a few public performances. It is at these public showings, however, that I am coming to learn what

means. This is how the credits appear when an adaptation is being performed.

What I mean by my choreography includes the transmission from me to the dancer, of the same set of questions I ask myself when I am performing a particular movement sequence that ministers shape to a dance. I will not talk about my movement choices here, except to say that as an aspect of my choreography they fall almost exclusively into three categories: 1) impossible to realize, 2) embarrassing to “do”, or, idiotic to contemplate, 3) maddeningly simple. These movement directions are not unlike my questions that are 1) unanswerable, 2) impossible to truly comprehend, and, at the same time, 3) poignantly immediate.

History choreographs all of us, including dancers. The choreographed body dominates most dancing, for better or for worse. The questions that guide me through a dance are like the tools one would use for renovating an already existing house. Like a screwdriver being turned counter-clockwise, or a crow bar prying boards free from a wall, the dancer applies the questions to re-choreograph his/her perceived relationship to him/herself, the audience, space, time, and the instantaneous awareness of any of these combined experiences. The questions help uproot behavior that gathers experimentally and/or experientially.

When I see a singularly coherent choreographed body, performing a solo adaptation, I know that the dancer is not choosing to exercise the re-measuring tools needed to counter-choreograph the predominance of learned behavior. I use the words “choosing to exercise” because most of us know exactly what is required when we choose to train the physical body to adapt to a choreographer’s aesthetics. Training oneself in a questioning process that counter-choreographs the learned body requires similar devotion and constancy.

Every dancer who learns one of my solo dances, signs a contract, committing to a minimum three months of practice before the first public performance of his/her solo adaptation. Three months is not an estimate. It is based on my experience with new material. In order to recognize all the ways I hold onto ideas, images, suppositions, beliefs, the ways my body attaches to what I think the material ‘is’, or should feel like, or look, I need to be alone in a studio, noticing the infinitely momentary feedback that arises from my daily performance of a reliable sequence of movement directions, influenced by the immediacy arising from the same questions day after day after day.

I recognize my choreography when I see a dancer’s self-regulated transcendence of his/her choreographed body within in a movement sequence that distinguishes one dance from another.

self-publications:
• Voilà, a dance libretto, choreographed and written by Deborah Hay, 1996 (performances at the Kitchen, New York, NY, april 1997), 15 pages.
•No Time to Fly, a solo dance score written by Deborah Hay, 2010, Austin, TX, 18 pages. Republished as is, with a new cover, by CasCo, Office for Art, Design and Theory, Utrecht, Netherlands, 2013, 18 pages.
• Boom Boom Boom, with the score of Fire, 1999, written and choreographed by Deborah Hay, (performances at The Off Center, Austin, TX), april 2000, 10 postcards.
•Tasting the Blaze : A chronicle of performance collaboration, Futura Press, Austin, TX, 1985, 41 pages.